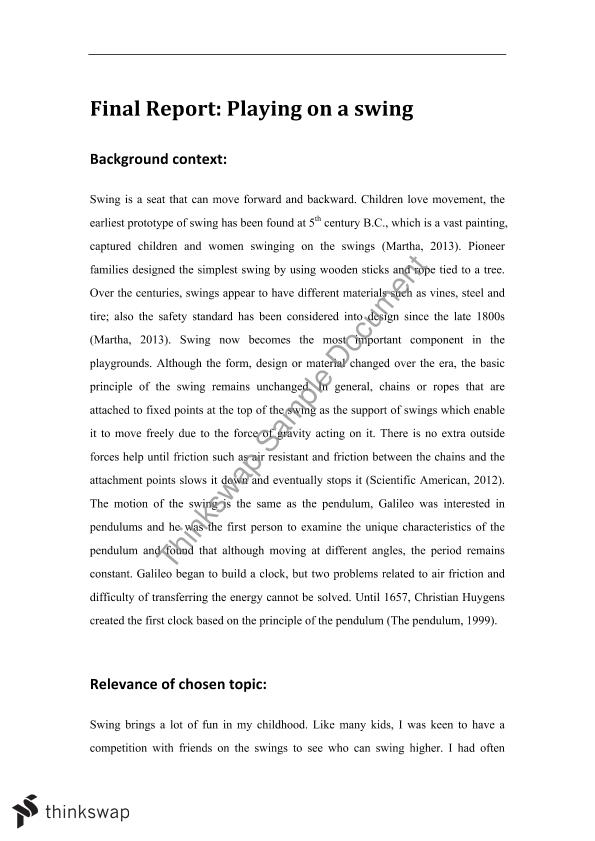 Swing is a seat that can move forward and backward. Children love movement, the earliest prototype of swing has been found at 5th century B.C., which is a vast painting, captured children and women swinging on the swings (Martha, 2013). Pioneer families designed the simplest swing by using wooden sticks and rope tied to a tree. Over the centuries, swings appear to have different materials such as vines, steel and tire; also the safety standard has been considered into design since the late 1800s (Martha, 2013). Swing now becomes the most important component in the playgrounds. Although the form, design or material changed over the era, the basic principle of the swing remains unchanged. In general, chains or ropes that are attached to fixed points at the top of the swing as the support of swings which enable it to move freely due to the force of gravity acting on it. There is no extra outside forces help until friction such as air resistant and friction between the chains and the attachment points slows it down and eventually stops it (Scientific American, 2012). The motion of the swing is the same as the pendulum, Galileo was interested in pendulums and he was the first person to examine the unique characteristics of the pendulum and found that although moving at different angles, the period remains constant. Galileo began to build a clock, but two problems related to air friction and difficulty of transferring the energy cannot be solved. Until 1657, Christian Huygens created the first clock based on the principle of the pendulum (The pendulum, 1999).