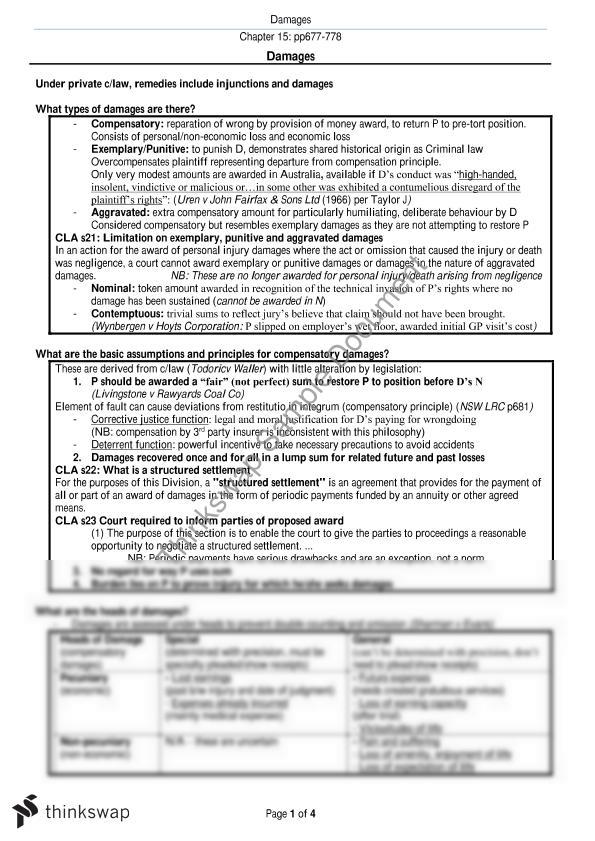 - Compensatory: reparation of wrong by provision of money award, to return P to pre-tort position. Consists of personal/non-economic loss and economic loss - Exemplary/Punitive: to punish D, demonstrates shared historical origin as Criminal law Overcompensates plaintiff representing departure from compensation principle. Only very modest amounts are awarded in Australia, available if D’s conduct was “high-handed, insolent, vindictive or malicious or…in some other was exhibited a contumelious disregard of the plaintiff’s rights”: (Uren v John Fairfax & Sons Ltd (1966) per Taylor J) - Aggravated: extra compensatory amount for particularly humiliating, deliberate behaviour by D Considered compensatory but resembles exemplary damages as they are not attempting to restore P CLA s21: Limitation on exemplary, punitive and aggravated damages In an action for the award of personal injury damages where the act or omission that caused the injury or death was negligence, a court cannot award exemplary or punitive damages or damages in the nature of aggravated damages. NB: These are no longer awarded for personal injury/death arising from negligence - Nominal: token amount awarded in recognition of the technical invasion of P’s rights where no damage has been sustained (cannot be awarded in N) - Contemptuous: trivial sums to reflect jury’s believe that claim should not have been brought. (Wynbergen v Hoyts Corporation: P slipped on employer’s wet floor, awarded initial GP visit’s cost)