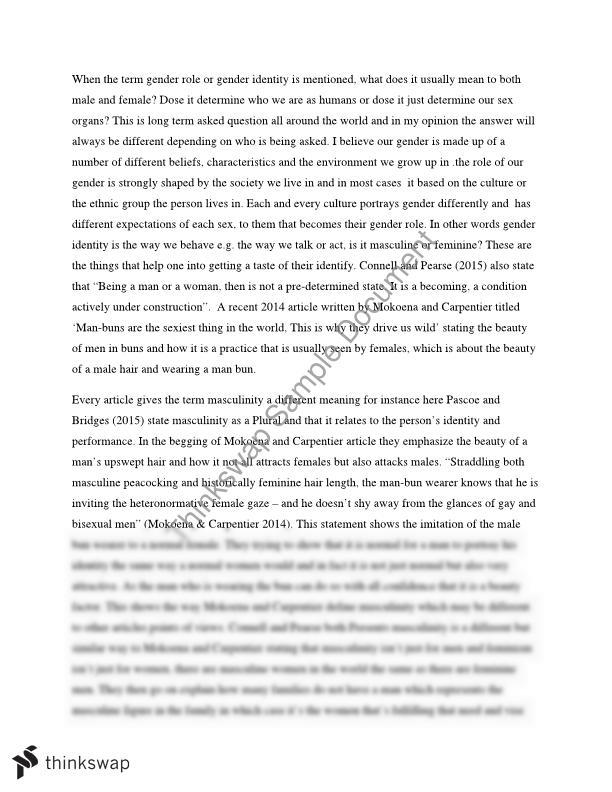 Intro When the term gender role or gender identity is mentioned, what does it usually mean to both male and female? Dose it determine who we are as humans or dose it just determine our sex organs? This is long term asked question all around the world and in my opinion the answer will always be different depending on who is being asked. I believe our gender is made up of a number of different beliefs, characteristics and the environment we grow up in .the role of our gender is strongly shaped by the society we live in and in most cases it based on the culture or the ethnic group the person lives in. Each and every culture portrays gender differently and has different expectations of each sex, to them that becomes their gender role. In other words gender identity is the way we behave e.g. the way we talk or act, is it masculine or feminine? These are the things that help one into getting a taste of their identify. Connell and Pearse (2015) also statethat “Being a man or a woman, then is not a pre-determined state. It is a becoming, a condition actively under construction”. A recent 2014 article written by Mokoena and Carpentier titled ‘Man-buns are the sexiest thing in the world, This is why they drive us wild’ stating the beauty of men in buns and how it is a practice that is usually seen by females, which is about the beauty of a male hair and wearing a man bun.