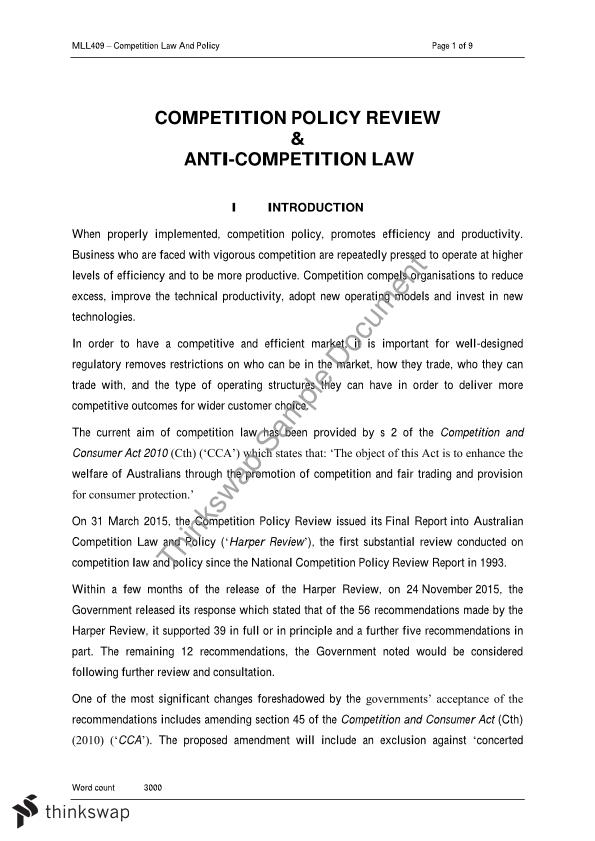 Amending section 45 of the Competition and Consumer Act (Cth)

When properly implemented, competition policy, promotes efficiency and productivity. Business who are faced with vigorous competition are repeatedly pressed to operate at higher levels of efficiency and to be more productive. Competition compels organisations to reduce excess, improve the technical productivity, adopt new operating models and invest in new technologies. In order to have a competitive and efficient market, it is important for well-designed regulatory removes restrictions on who can be in the market, how they trade, who they can trade with, and the type of operating structures they can have in order to deliver more competitive outcomes for wider customer choice. The current aim of competition law has been provided by s 2 of the Competition and Consumer Act 2010 (Cth) (‘CCA’) which states that: ‘The object of this Act is to enhance the welfare of Australians through the promotion of competition and fair trading and provision for consumer protection.’ On 31 March 2015, the Competition Policy Review issued its Final Report into Australian Competition Law and Policy (‘Harper Review’), the first substantial review conducted on competition law and policy since the National Competition Policy Review Report in 1993. Within a few months of the release of the Harper Review, on 24 November 2015, the Government released its response which stated that of the 56 recommendations made by the Harper Review, it supported 39 in full or in principle and a further five recommendations in part. The remaining 12 recommendations, the Government noted would be considered following further review and consultation.