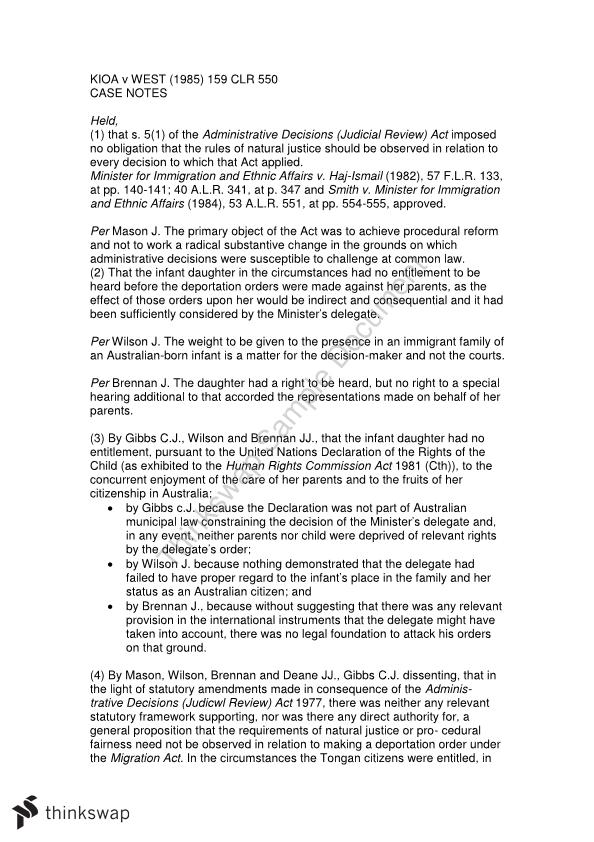 KIOA v WEST (1985) 159 CLR 550 CASE NOTES Held, (1) that s. 5(1) of the Administrative Decisions (Judicial Review) Act imposed no obligation that the rules of natural justice should be observed in relation to every decision to which that Act applied. Minister for Immigration and Ethnic Affairs v. Haj-Ismail (1982), 57 F.L.R. 133, at pp. 140-141; 40 A.L.R. 341, at p. 347 and Smith v. Minister for Immigration and Ethnic Affairs (1984), 53 A.L.R. 551, at pp. 554-555, approved. Per Mason J. The primary object of the Act was to achieve procedural reform and not to work a radical substantive change in the grounds on which administrative decisions were susceptible to challenge at common law. (2) That the infant daughter in the circumstances had no entitlement to be heard before the deportation orders were made against her parents, as the effect of those orders upon her would be indirect and consequential and it had been sufficiently considered by the Minister's delegate.