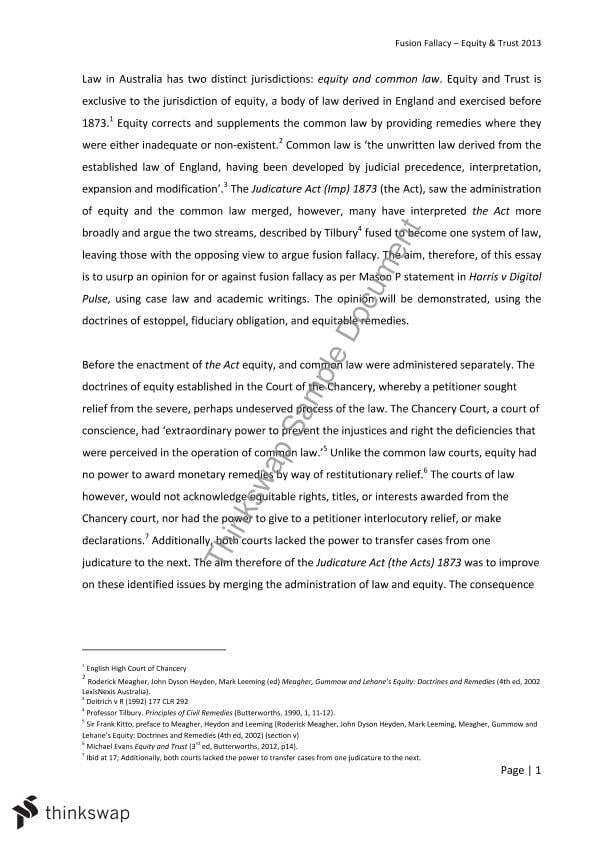 Law in Australia has two distinct jurisdictions: equity and common law. Equity and Trust is exclusive to the jurisdiction of equity, a body of law derived in England and exercised before 1873. Equity corrects and supplements the common law by providing remedies where they were either inadequate or non-existent. Common law is ‘the unwritten law derived from the established law of England, having been developed by judicial precedence, interpretation, expansion and modification’. The Judicature Act (Imp) 1873 (the Act), saw the administration of equity and the common law merged, however, many have interpreted the Act more broadly and argue the two streams, described by Tilbury fused to become one system of law, leaving those with the opposing view to argue fusion fallacy. The aim, therefore, of this essay is to usurp an opinion for or against fusion fallacy as per Mason P statement in Harris v Digital Pulse, using case law and academic writings. The opinion will be demonstrated, using the doctrines of estoppel, fiduciary obligation, and equitable remedies.