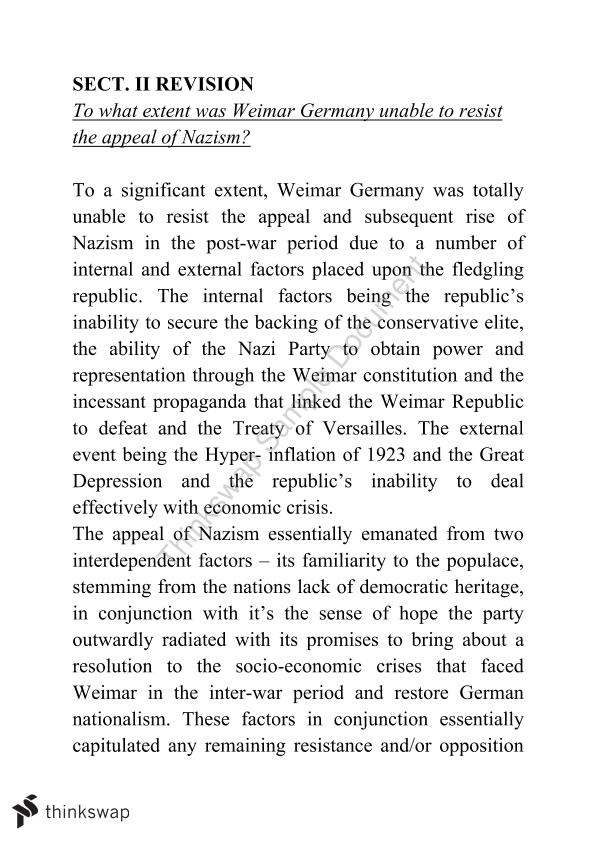 To What Extent was Weimar Germany Unable to Resist the Appeal of Nazism?

To a significant extent, Weimar Germany was totally unable to resist the appeal and subsequent rise of Nazism in the post-war period due to a number of internal and external factors placed upon the fledgling republic. The internal factors being the republic’s inability to secure the backing of the conservative elite, the ability of the Nazi Party to obtain power and representation through the Weimar constitution and the incessant propaganda that linked the Weimar Republic to defeat and the Treaty of Versailles. The external event being the Hyper- inflation of 1923 and the Great Depression and the republic’s inability to deal effectively with economic crisis.

Similar documents to "To What Extent was Weimar Germany Unable to Resist the Appeal of Nazism?" available on Thinkswap

Documents similar to "To What Extent was Weimar Germany Unable to Resist the Appeal of Nazism?" are suggested based on similar topic fingerprints from a variety of other Thinkswap Subjects