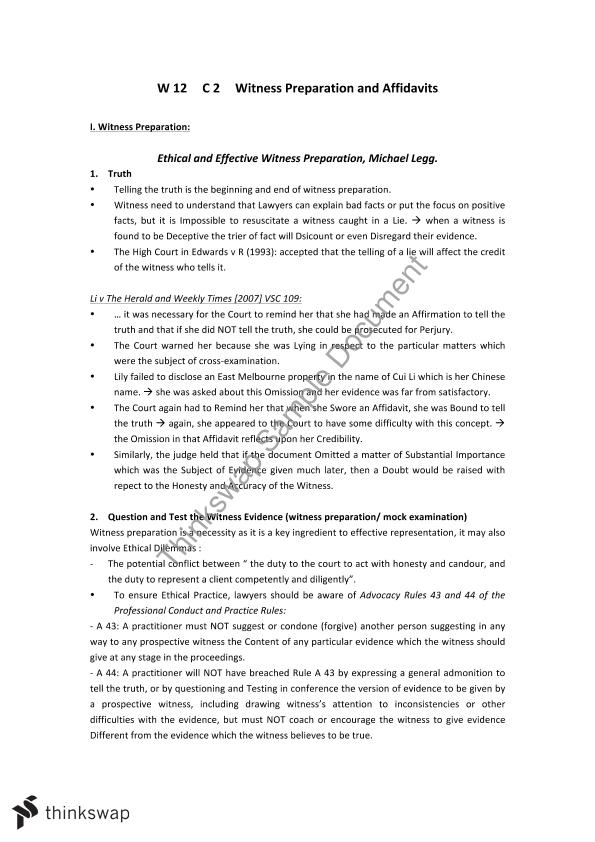 I. Witness Preparation: Ethical and Effective Witness Preparation, Michael Legg. 1. Truth • Telling the truth is the beginning and end of witness preparation. • Witness need to understand that Lawyers can explain bad facts or put the focus on positive facts, but it is Impossible to resuscitate a witness caught in a Lie.àwhen a witness is found to be Deceptive the trier of fact will Dsicount or even Disregard their evidence. • The High Court in Edwards v R (1993): accepted that the telling of a lie will affect the credit of the witness who tells it. Li v The Herald and Weekly Times [2007] VSC 109: • ... it was necessary for the Court to remind her that she had made an Affirmation to tell the truth and that if she did NOT tell the truth, she could be prosecuted for Perjury. • The Court warned her because she was Lying in respect to the particular matters which were the subject of cross-examination. • Lily failed to disclose an East Melbourne property in the name of Cui Li which is her Chinese name.àshe was asked about this Omission and her evidence was far from satisfactory. • The Court again had to Remind her that when she Swore an Affidavit, she was Bound to tell the truthàagain, she appeared to the Court to have some difficulty with this concept.à the Omission in that Affidavit reflects upon her Credibility. • Similarly, the judge held that if the document Omitted a matter of Substantial Importance which was the Subject of Evidence given much later, then a Doubt would be raised with repect to the Honesty and Accuracy of the Witness. 2. Question and Test the Witness Evidence (witness preparation/ mock examination) Witness preparation is a necessity as it is a key ingredient to effective representation, it may also involve Ethical Dilemmas : - The potential conflict between “ the duty to the court to act with honesty and candour, and the duty to represent a client competently and diligently”. • To ensure Ethical Practice, lawyers should be aware of Advocacy Rules 43 and 44 of the Professional Conduct and Practice Rules: - A 43: A practitioner must NOT suggest or condone (forgive) another person suggesting in any way to any prospective witness the Content of any particular evidence which the witness should give at any stage in the proceedings. - A 44: A practitioner will NOT have breached Rule A 43 by expressing a general admonition to tell the truth, or by questioning and Testing in conference the version of evidence to be given by a prospective witness, including drawing witness’s attention to inconsistencies or other difficulties with the evidence, but must NOT coach or encourage the witness to give evidence Different from the evidence which the witness believes to be true.

Similar documents to "Witness Preparation and Affidavits" available on Thinkswap