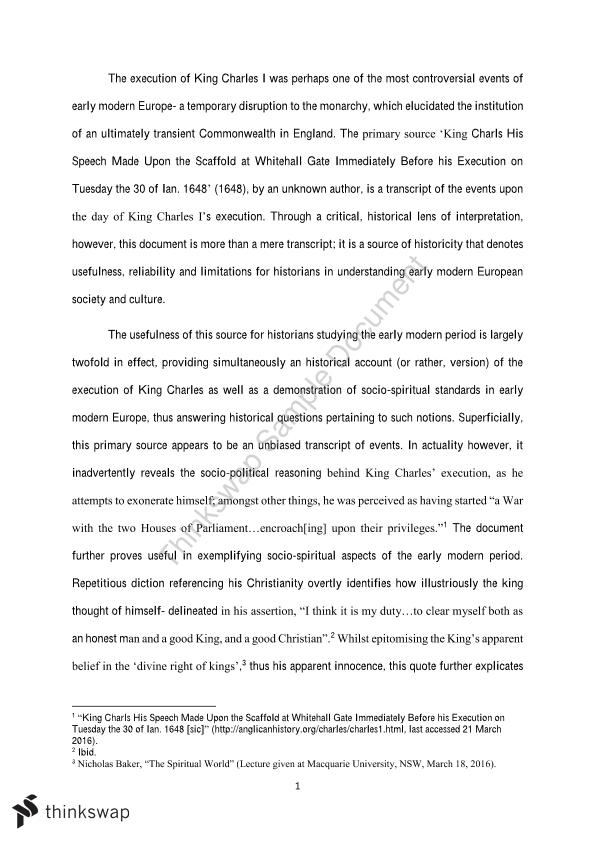 MHIS121 - After the Black Death: Europe

MARK: 80/100 Write a 1,000-word analysis of this document describing the execution of King Charles I of England on 30 January 1649 (note, the document says 1648 because the new year in seventeenth-century England began on 25 March not 1 January). Should the link fail, you can locate the document here: http://anglicanhistory.org/charles/charles1.html Your analysis needs to answer the following questions, but note that you need to write a coherent paper not a dot-point list of answers: 1. What sort of document is it? 2. When was the document created? 3. What was the purpose of the document? Why did the author/s create it? 4. Who do you think was the intended audience of the document? Why do you think this? 5. What can we (as historians) learn from the document? Was sort of information does it contain about its ostensible topic and also about the period in which it was created more generally? 6. What are the limitations of the document? What does it not tell us as historians (deliberately or accidentally, or just because of the limitations of the type of document)? 7. What historical question or questions could this document help to answer?