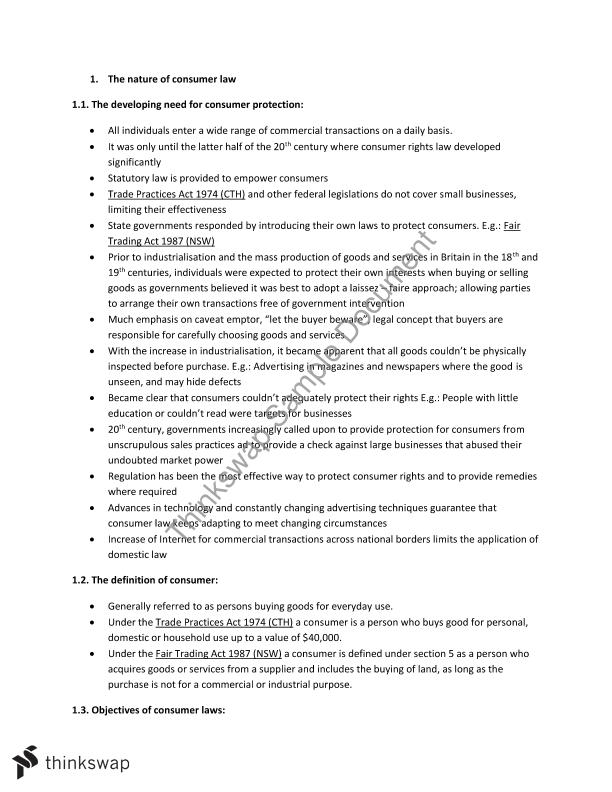 1. The nature of consumer law 1.1. The developing need for consumer protection: • All individuals enter a wide range of commercial transactions on a daily basis. • It was only until the latter half of the 20th century where consumer rights law developed significantly • Statutory law is provided to empower consumers • Trade Practices Act 1974 (CTH) and other federal legislations do not cover small businesses, limiting their effectiveness • State governments responded by introducing their own laws to protect consumers. E.g.: Fair Trading Act 1987 (NSW) • Prior to industrialisation and the mass production of goods and services in Britain in the 18th and 19th centuries, individuals were expected to protect their own interests when buying or selling goods as governments believed it was best to adopt a laissez – faire approach; allowing parties to arrange their own transactions free of government intervention • Much emphasis on caveat emptor, “let the buyer beware”, legal concept that buyers are responsible for carefully choosing goods and services • With the increase in industrialisation, it became apparent that all goods couldn’t be physically inspected before purchase. E.g.: Advertising in magazines and newspapers where the good is unseen, and may hide defects • Became clear that consumers couldn’t adequately protect their rights E.g.: People with little education or couldn’t read were targets for businesses • 20th century, governments increasingly called upon to provide protection for consumers from unscrupulous sales practices ad to provide a check against large businesses that abused their undoubted market power • Regulation has been the most effective way to protect consumer rights and to provide remedies where required • Advances in technology and constantly changing advertising techniques guarantee that consumer law keeps adapting to meet changing circumstances • Increase of Internet for commercial transactions across national borders limits the application of domestic law