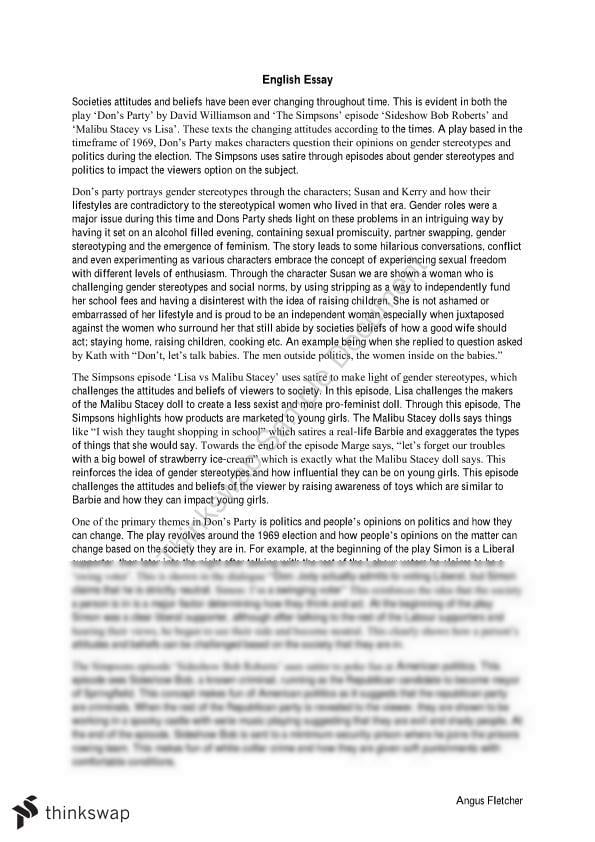 Societies attitudes and beliefs have been ever changing throughout time. This is evident in both the play ‘Don’s Party’ by David Williamson and ‘The Simpsons’ episode ‘Sideshow Bob Roberts’ and ‘Malibu Stacey vs Lisa’. These texts the changing attitudes according to the times. A play based in the timeframe of 1969, Don’s Party makes characters question their opinions on gender stereotypes and politics during the election. The Simpsons uses satire through episodes about gender stereotypes and politics to impact the viewers option on the subject. Don’s party portrays gender stereotypes through the characters; Susan and Kerry and how their lifestyles are contradictory to the stereotypical women who lived in that era. Gender roles were a major issue during this time and Dons Party sheds light on these problems in an intriguing way by having it set on an alcohol filled evening, containing sexual promiscuity, partner swapping, gender stereotyping and the emergence of feminism. The story leads to some hilarious conversations, conflict and even experimenting as various characters embrace the concept of experiencing sexual freedom with different levels of enthusiasm. Through the character Susan we are shown a woman who is challenging gender stereotypes and social norms, by using stripping as a way to independently fund her school fees and having a disinterest with the idea of raising children.