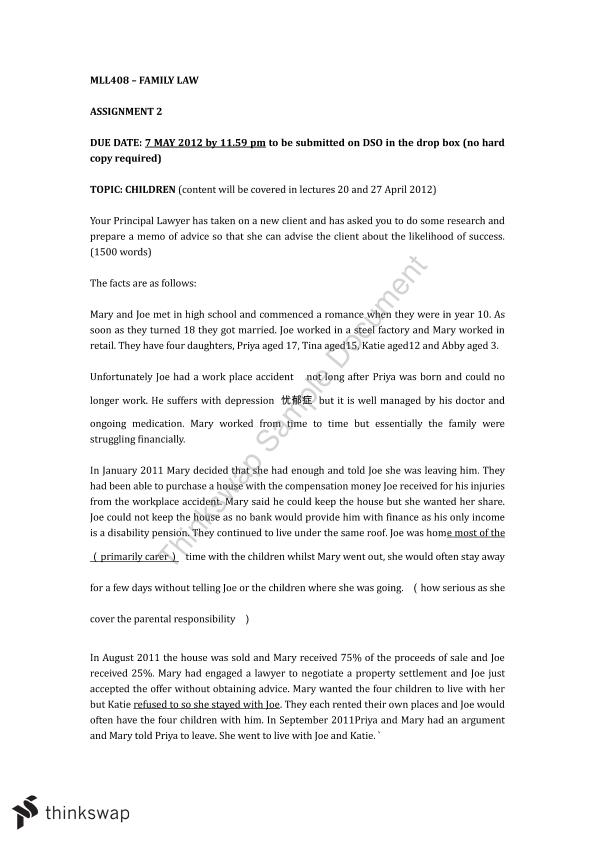 MLL408 – FAMILY LAW ASSIGNMENT 2 DUE DATE: 7 MAY 2012 by 11.59 pm to be submitted on DSO in the drop box (no hard copy required) TOPIC: CHILDREN (content will be covered in lectures 20 and 27 April 2012) Your Principal Lawyer has taken on a new client and has asked you to do some research and prepare a memo of advice so that she can advise the client about the likelihood of success. (1500 words) The facts are as follows: Mary and Joe met in high school and commenced a romance when they were in year 10. As soon as they turned 18 they got married. Joe worked in a steel factory and Mary worked in retail. They have four daughters, Priya aged 17, Tina aged15, Katie aged12 and Abby aged 3. Unfortunately Joe had a work place accident not long after Priya was born and could no longer work. He suffers with depression 忧郁症 but it is well managed by his doctor and ongoing medication. Mary worked from time to time but essentially the family were struggling financially. In January 2011 Mary decided that she had enough and told Joe she was leaving him. They had been able to purchase a house with the compensation money Joe received for his injuries from the workplace accident. Mary said he could keep the house but she wanted her share. Joe could not keep the house as no bank would provide him with finance as his only income is a disability pension. They continued to live under the same roof. Joe was home most of the (primarily carer) time with the children whilst Mary went out, she would often stay away for a few days without telling Joe or the children where she was going. (how serious as she cover the parental responsibility ) In August 2011 the house was sold and Mary received 75% of the proceeds of sale and Joe received 25%. Mary had engaged a lawyer to negotiate a property settlement and Joe just accepted the offer without obtaining advice. Mary wanted th